The feeling I am going for in this game is sort of Sherlock Holmes meets Cthulhu. A dark Victorian age steampunk and yet still primarily fantasy game. With High Magic, Tech, Dwarves, Elves, Trolls and such. You can think sort of like a Victorian age Shadowrun game but that would also put you sort of off the idea in my head. Kind of a cross between Detective/Agent Noir in a very dark world. With a good dash of horror thrown in for flavor.

The game mechanic that I am currently most familiar with is D&D 3.0 & 3.5. But I like the changes and additions from Pathfinder and Monte Cook’s Arcana Evolved & Unearthed. So I am going to use them as well. No real dramatic changes to the game mechanics. A fireball is still a fireball and a 5’ step is still a 5’ step. The players should have little trouble if you are familiar with D&D 3.0 or 3.5.

The very understructure of the reality of this world is shattered. No one alive knows how this happened. Perhaps it was just always this way. The world is made up of expanses bordered by rifts of pure chaos. Some of the expanses are mostly stable while others are constantly in flux. You can think of the expanses as some thing like worm holes that have switched out parts of one place, with parts from another. Some thing like the Bermuda Triangle could be an unstable rift to the Shattered World. Or the Wardrobe from “The Lion, the Witch and the Wardrobe”. If one knows how or gets lucky one can traverse the rifts and travel across the multiverse.

The game begins in the expanse of Londinium. This expanse a mostly stable area. The expanse is taken up by the City of New Londinium and its surrounding lands. Londinium expanse and the expanses connected to it, are a island (islands?) of civilization in a sea of mostly chaos.

By far the most powerful force in New Londinium is the Dragon Empress Morgantha. Being an ancient Black Spell using Dragon. When in dragon form she is huge. She is mostly encountered in her form as a ebony skinned Lady. But she is able to pass herself off as any class or race of being that she desires. (It is not believed that she can recreate any specific being, but this is unconfirmed.)

Morgantha‘s right hand are the Draconians who generally follow her will as if she were a god. In general serving blindly, unwavering, and faithful. She uses a network of spies and mercenaries that along with her special investigators (Where the PC’s come in) to gather information. This is all tied together by the Drow that serve as the logistics and control structure in this system.

The Empress Morgantha is generally seen as the lesser of two evils. She promotes peace even if it is at the end of a her fist. She generaly stands behind Queen Gladriel and leaves her to be the head of state. As long as peace and control are maintained, and exploration of the Shattered World continues. Her power and forces stand as a bulwark against the chaos and perpetual war that is the Shattered World.

Queen Gladriel of New Londinium is the next most powerful. She is the Bearer of what is being called the Dragon Orb. It is called that because it was given to her by Morgantha. Not because it gives her any power over Dragons. She is (Generally) believed to be one of the relatively few surviving powerful High-Humans.

This brings me to the Engineering Guild. And the Head Engineer Torquemada. The Empress put the Head Engineer in charge of the guild. With the expressed intent to control the engineers and there power. She gave the Head Engineer the authority, and power to do whatever it took to do this job. To this end two of the greatest crimes against the state are. To create greater than ones approved engineering status. Or to teach the skills to someone unapproved or above there approved status. Both of these crimes carry a death sentence. (Repeat offenders are rare.)

Other lesser but still significant forces.

There is a Parliament. Elected by the people. Though largely to assuage and entertain those same people. A Council of Mages. The Manufacturing guild. The Police. Various Churches. There is an Aristocracy. Even though they have most of the money and resources they can not generally be bothered to control them. Leaving that job to there underlings. After all it is just not done to dirty ones hands with work. An lower upper class made up of guilds men, engineers, and other business owners who have made there money. The filthy handed bastards. There are many of the other powers laying hidden in the cracks and crevasse of the society.

A slice of history.

Over a hundred years ago in a brief but overwhelming series of quick surgical strikes. Launched from large flying ships. Depositing her Draconian solders past any defenses. Empress Morgantha conquered Londinium and the immediately surrounding expanses. Though it was far from bloodless. It was clearly seen that effort was given to prevent as much death and destruction as possible.

Queen Isobel (Mother to now Queen Gladriel) was forced to surrender or see the total dissolution of her people. After swearing her loyalty to Morgantha, Isobel was returned to her throne to act as head of state under the rule of Morgantha. Though opposing her will is a death sentence, Morgantha is uninterested in the lives of the people. Queen Isobel and now Queen Gladriel stand against the greater abuses of there people. Life is still a harsh and bitter thing. But with Morgantha’s power and forces standing against the raw chaos of the rifts people can live there hard lives without fear of sudden death from the force of the rifts.

Magic has always been a powerful force on the Shattered World in general. Powerful Wizards are some what rare. Lesser practitioners of all forms are common. Common magical items are turned out in numbers. And even more powerful magic items are a little more common than in many games. There are TechnoMagic and Steampunk items available. Magic items, though common, have a tendency to wind down quickly. Spells just don’t last for centuries like in many game worlds. Without a wizard to regularly reinforce a spell or item it loses its magical nature as the magic un-weaves.

Technology is rapidly replacing both handcrafted items and magic. Factories are being made to create the base items that people need. Cloth, mill work, refining of ore’s and materials. The concept of the assembly line is coming in around the corner. There is a revolution on to even replace most of the workforce with the new machines.

The one position that is not in any danger at this point is the engineer. Because technology is not the easy answer either. Technology is almost like a different form of magic with illogical rules of its own. Electricity will not flow through a wire, Gases or liquids will not flow properly through tubes unless the proper rituals are performed over them. Mandalas and runes carved into the wires or pipes and on gears. The proper words said and actions performed. It is totally illogical and no one (That any one knows of) is sure why. But you do not have to be special to perform these rites. It does not take a cleric or a wizard. Technology might not last any longer than the magic equivalent but finding some one to repair or renew the rituals is easier and cheaper.

The most complicated thing that can be created without an engineer is a single speed bike (without brakes). Two wheels, two gears, a chain, pedals, and a basic steering mechanism. And even that is prone to sudden mysterious breakdowns.

Cleric powers work. Though no one has seen or heard of a god or there avatars to walk the streets of New Londinium or the Shattered World in generations. People have claimed to have met gods when traveling through alternate dimensions or Rifts. There are a lot of crazy people and powerful beings out in the rifts though. These sightings are generally discounted as one or both of the above. The gods if there are any do not communicate with there clerics on the Shattered World. It is even questioned on whether the power comes from the gods. But the fact is if one believes and honors the thought of the being, powers can manifest in the believer.

Cleric magic works a bit differently to. Though a spell may replace a persons hit points they still are left with a gaping wound. Infections are common and kill more people than the initial wound. Many healing Clerics have also turned to the skills of medicine and surgery to help there charges. Even still death is common and resurrection a rare and expensive gamble. 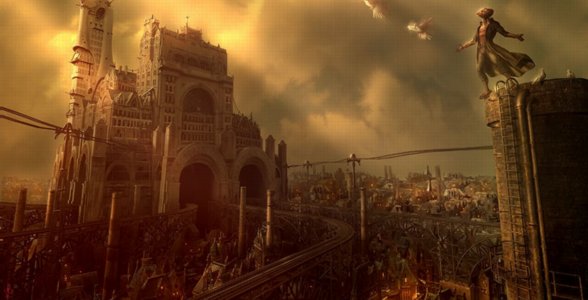 Can’t wait until our first play meeting. I just ordered a set of dice. I will have a D20 :-D will be ready to go.

Well It is less than 12 hours until the meetup to create characters. So far three other people besides myself seem to be interested in the game and the meetup today.

I am eager and nervous at the same time.

I'm sorry, but we no longer support this web browser. Please upgrade your browser or install Chrome or Firefox to enjoy the full functionality of this site.